Night is one of my favourite times to do photography; peace and quiet at last - most people are in watching TV. If you're just starting, you need a decent digital camera (DSLR or Mirrorless) that hopefully has good high ISO ability. Also, a sturdy tripod of course. A torch is essential (I use a large LED Maglite) and if you're female, a friend would be good for safety. If you go out alone, tell someone where you're going and what time you expect to be back. Ideally shoot RAW not Jpeg, as you then have much more scope for correcting exposures during processing your images. 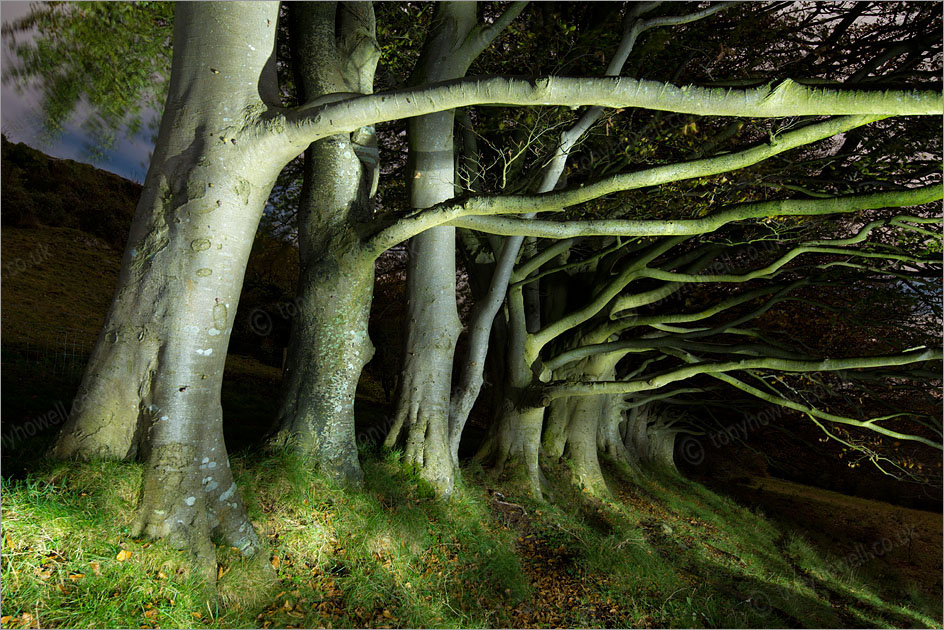 
Images like the above are pretty easy when you get the hang of it; you just need to practice it. Focus using a torch, set the camera to 'B' or 'Bulb'. You'll need a locking cable release to hold the shutter open long enough while you shine your torch on the trees. I walked down the right hand side of the trees to light them, ensuring the torch didn't shine into the lens. Note the low ISO - you don't need higher ISO for this kind of image unless there are things moving too much and you'd like to arrest the movement as much as possible. You can see how the breeze has made the leaves move at top left but I was happy to leave that. Also note that I used f/8 - a medium aperture means I had enough Depth-of-field to ensure that enough of the image was in the zone of sharp focus. Even though it was quite dark there was a moon (at last quarter phase) which meant I could see fairly well without a torch when my eyes had adjusted. Moonless nights make this kind of image harder work, but are great for the subject below 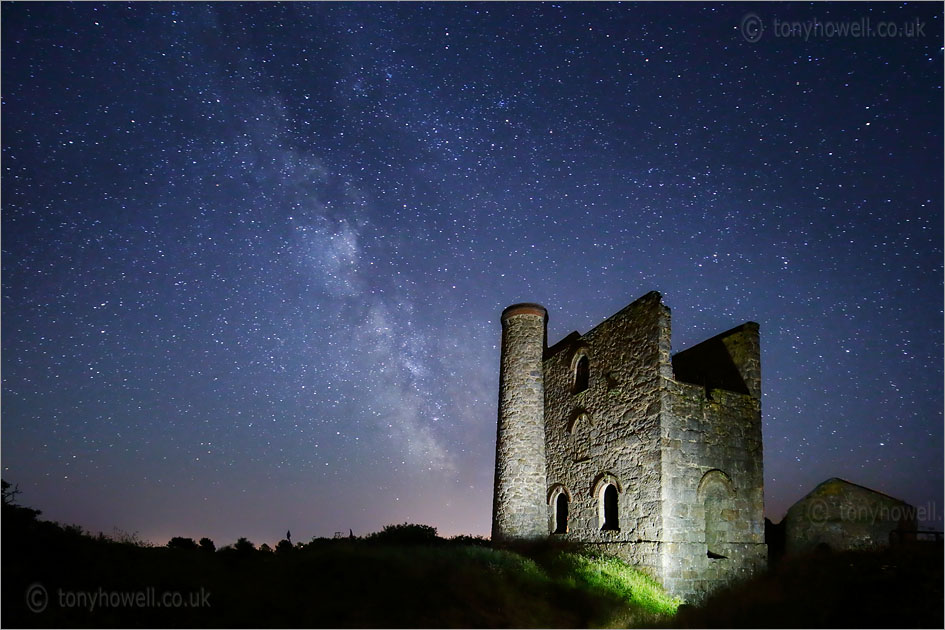 
If you want to show stars as points of light, looking natural rather than streaking across the image, you need a faster shutter speed than the Beech Trees image. If I left the shutter open for longer than 32 seconds the stars would show as short streaks. 30 seconds is usually the longest exposure I do with stars, and that's with a wide 17mm lens. If you're using a shorter lens (like 28mm, 35mm) then try to stay at 20 seconds or shorter if you can. Use the widest aperture you have (small number like f/4) and a very high ISO to allow the stars to show up brightly. As you have to use a large aperture, good focusing is quite critical as Depth-of-field is narrow when using large apertures. That's one reason I prefer using wide angle lenses for night photography. Even though I was only about 10 feet from the tin mine, the wide angle lens allowed the tin mine and the stars to both be in sharp focus. A shorter lens wouldn't have allowed this unless you use a smaller aperture like f/8 - but then the exposure would have been too long and the stars would have streaked.

If you want to show the milky way in all it's glory you'll need to be out after midnight in summer on a moonless night, away from light pollution. The light visible just above the foliage on the left is from the distant lights (7 miles away) of Penzance. I used my torch to illuminate both the tin mine and enough grass to add extra colour. It was amazing to be there - one of the best nights of my life 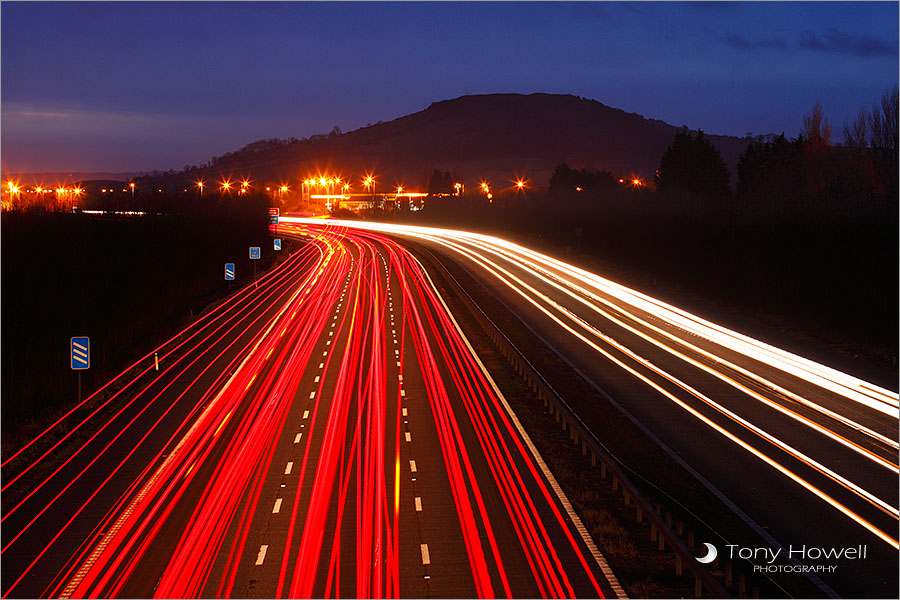 Traffic trails are easy enough, just get there early, set up and wait till just before dark. Keep some light in the sky, black skies aren't as attractive. Try to find a location with a bend in the road to add a nice curve to your image, then wait for an abundance of traffic. Longer exposures of 20 seconds or more allow for good long streaks - too short an exposure and the car lights stop unnaturally in the frame. ISO between 100-400 is normally fine. 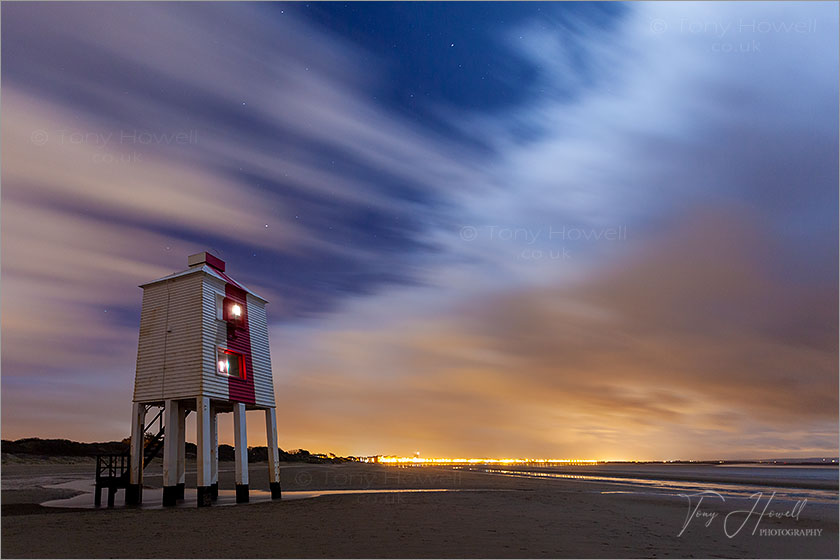 Burnham's classic landmark, the wooden Lighthouse on the beach, built 1832 and still in use. I lived here and have photographed it many times, so my wife thought I was mad going out on this windy, rainy night. I knew the clouds would streak nicely across the frame during a long exposure of 30 seconds. The street lights of Burnham illuminated the low cloud and the stars shone through the gap. I had to keep sheltering my camera from the rain, but the beach was deserted; just me and the elements. Magical. 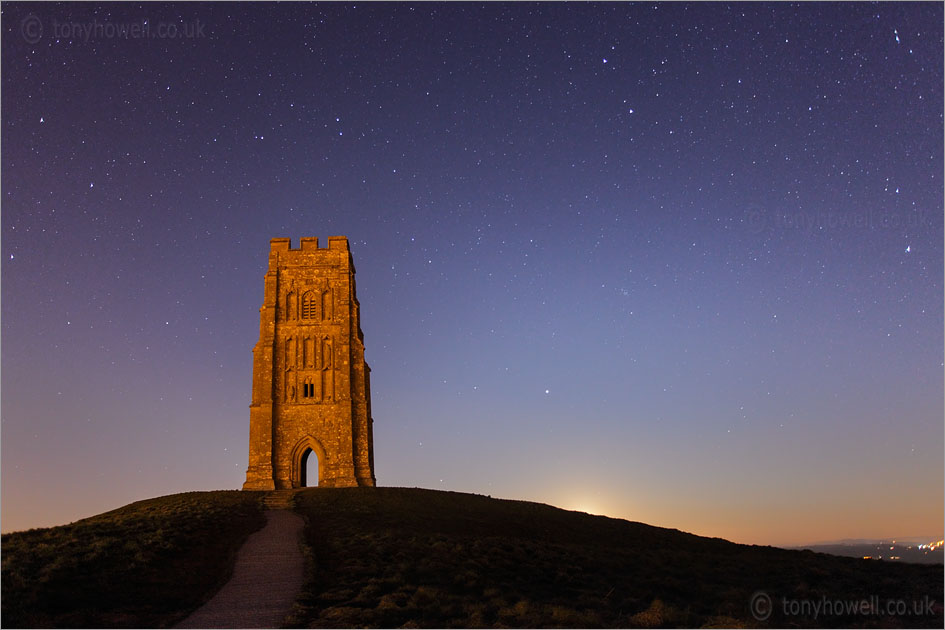 This image of Glastonbury Tor was quite straightforward, the Moon is rising behind the hill lending the scene a nice glow. The orange light on the Church tower is ambient light from the nearby street lights of Glastonbury Town. I used my head torch to subtly illuminate the path.

Keep an eye on the Moon phases: -

‘My compliments on a truly excellent website......it's fantastic to see a professional spending time on his website to provide hints and tips to people like me. Your pictures also provide me with great inspiration to do better.’ M.P, Plymouth, UK